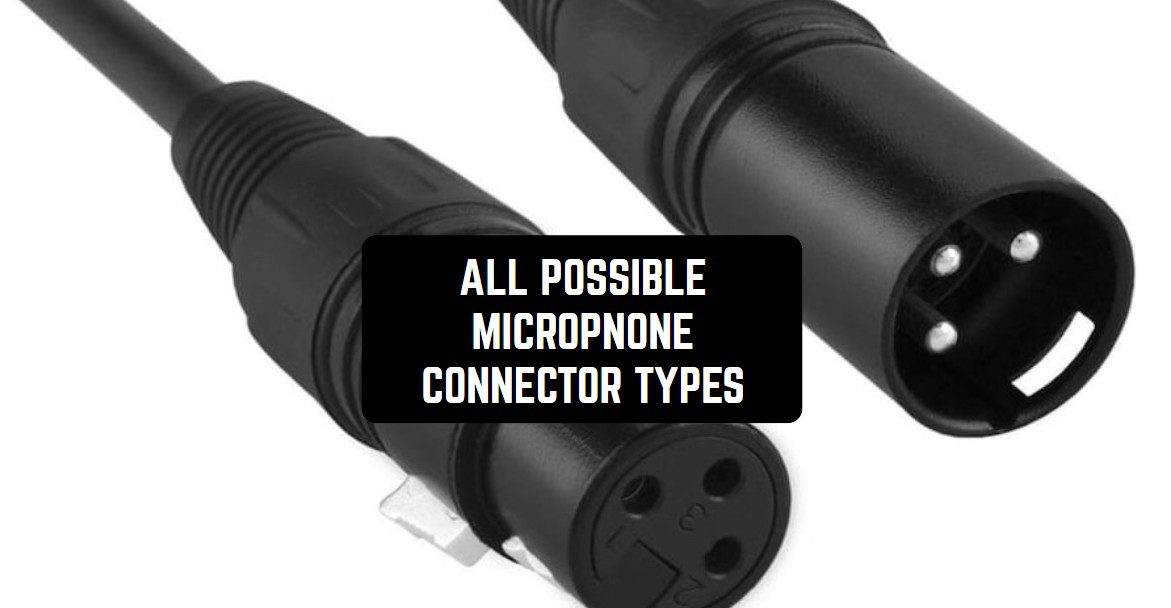 A microphone, or simply a mic, is a converter device that transforms sound waves into acoustic signals. Mics need to be plugged into recorders or mixers on one side and, eventually, into a playing system so that the listener could hear the sound recorded by the mic on the other side.

You may also like: Best XLR Audio Cables for Microphones

Where do we usually connect the mic? The most basic option is a preamplifier. It can be a separate device itself or can be included as a part of mixers, interfaces, recorders, etc.

However, a preamplifier is an option for more professional usage, since mics, depending on the type of connector, can be plugged into any audio input.

Here we will observe an extensive list of mic plugs. Some of them are common and present a large part of the market, while others, at the same time, are rare or already vintage.

You may also like: 9 Best Microphones for Canon Camera

XLR is a big group of the most popular connectors. The name is not an acronym like many people believe. There are a lot of plug models of this type, starting with 3-pin wiring patterns and finishing with 7-pin ones. Let’s observe a typical 3-pin plugin detail.

XLR belongs to the so-called balanced cable type. It is called so since it has three cables inside a plastic case: two signal cables and one ground cable. Signal cables carry signals of different polarities but of equal signal strength.

The XLR plug with 3 pins is the most typical to use for professional usage with advanced devices. As for the pins, pin 1 has a shield on it, and pins 2 and 3 are responsible for balancing the acoustic signal. Pin 2 carries an acoustic signal of positive polarity, and pin 3, respectively, is the negative one.

As it has already been said, the balance between the polarities is obtained thanks to the equal signal strength. The noise is the signal that is equal to the variation between two indicators of polarity. A differential amplifier sums up the variation between waves in pins 2 and 3 and then reduces everything that has a different

The XLR carries a balanced microphone acoustic signal. Pins 2 and 3 carry the same signal in opposite polarity. A differential amplifier at the balanced input sums the variations in signal between pins 2 and 3.

In doing so, it reduces any noise common to the two pins since it appears in the antiphase.

As for the energy system, the XLR cable is powered by a phantom system. It means that an equal voltage of 12-48V of direct current is forwarded through the cables to power condenser mics, however, some direct boxes can also use it. The sound is not affected by the voltage which is constant and equal on both cables.

Phantom power, which is required to power many active ribbon and condenser microphones through the XLR cable, puts +48V DC on pins 2 and 3. This constant and equal voltage does not affect the acoustic signal but effectively powers the microphone.

Mini XLR cables, as it comes from the name, are smaller versions of regular XLR cables we have discussed before. However, the size is not the only variation.

Minis can only have three or four pins, like a standard XLR, while a regular XLR can bear from three to ten pins. What’s more, basic versions are longer and considered to be of better quality, but, respectively, they are more expensive.

Mini XLR is convenient for connecting a body mic or a lavalier one to the transmitter. However, it can be used even with some studio mics too.

There are different types of Minis depending on the connection diagram. TA3 has three pins, and TA4 has four. They both have a standard ground cable, one for carrying DC voltage and one to carry an unbalanced acoustic signal.

Moreover, TA4 also has an additional pin providing resistance. As we can see, though Mini XLR originates from a basic version, it is an unbalanced cable that works on a different basis.

You may also like: 9 Best Microphones for iOS Under $100

Now we are moving on to connectors that are used mostly for manufacturing consumer-grade mics, which are TS and TRS types.

TS stands for a tip-sleeve plug that consists of a tip carrying an unbalanced signal and a sleeve that performs a function of a ground cable. TS plugs are usually small in size, that’s why they are unbalanced.

In TRS we have one additional letter R, which stands for Ring. This connector, as opposed to the previous one, is balanced since the ring provides a signal of negative polarity and the tip is responsible for the positive one.

Another R is another Ring, however, all the constituent parts now perform functions different from those they did in previous plugs. Now the Tip and the Ring go for the left and right acoustic signals, while another Ring performs ground cable functions.

This wiring diagram stands for sound only; to add a mic, there’s a sleeve. It is now a combo headset comprising a mic and headphones. Such a connector is commonly used for devices that link to famous jacks in phones or computers and can also be called aux cables.

The number in the name again stands for the number of cables. TA5 has five cables and, therefore, five pins.

The first as usual is a ground cable, next goes a bias voltage cable and a bias voltage selector for Pin 3, which is an acoustic signal bias. Pin 5 is disconnected from the rest of the cables.

Such a connector can be used to link lavalier mics with no-cable transmitters. It is quite a special type yet is rather diffused.

You may also like: 8 Best wireless microphones for events

Having a tube microphone can present some challenges regarding the choice of the plug. Sometimes the mic may have unique cables and connectors matching this particular model only. Sometimes standard seven-pin XLRs are used, however, there isn’t a set plug for all the mics of the type.

Tube microphones link to and send their signals through their power supplies.