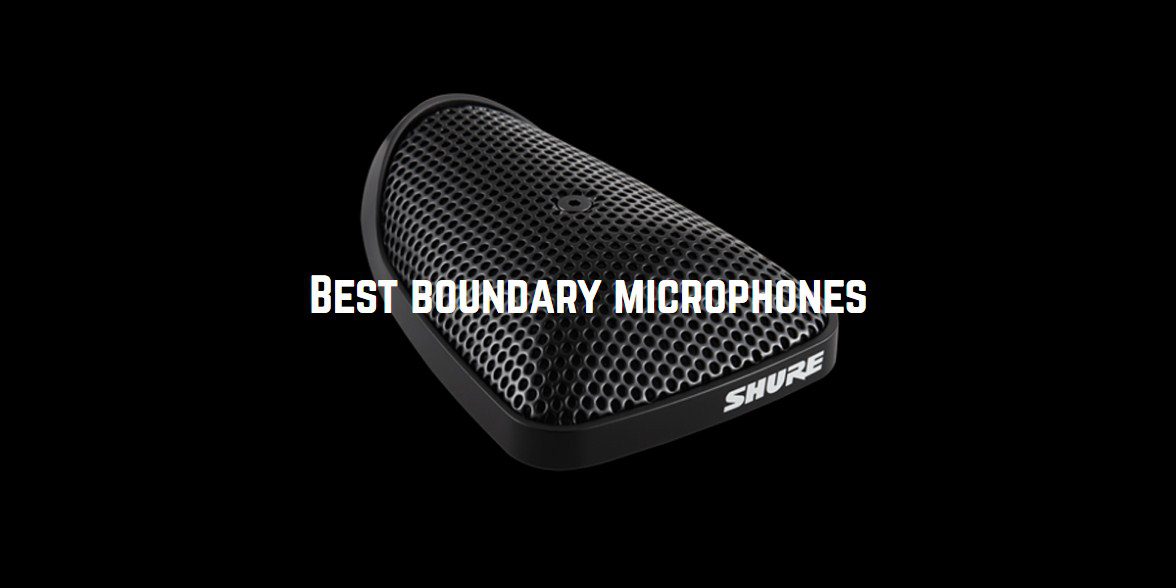 Boundary microphones are a very popular choice when it comes to conferences, meetings, other gatherings of people. You can use them for skyping as well. Some boundary mics can record musical instruments and therefore are used in studios. In sum, there can be found many areas of application. What are the top models on the market these days? Read on to find out!

ClearOne 910-156-250 microphone is a great solution for office conferences. It has a 360 degrees pick-up which means that all the voices, no matter where they are coming from, will be heard. At the same time, there is this first person priority system that gives preference to a person who’s speaking and reduces the volume of other sources. The mic has excellent noise cancellation. It can block acoustic echo and various ambient sounds. As a result, we get crisp and clear audio of really high quality.

The reaching radius of the microphone is 8 ft, which is alright for 8-12 people. Bigger gatherings will probably need some other microphone or even a couple of them. This model connects through a USB-cable which means you won’t need to buy an additional audio unit – all it takes is a computer and a cable. Wiring can be hidden below the table or left on the table if it doesn’t bother you.

The interface of the mic is rather interesting. Unlike many boundary microphones, this one has a mute button and volume adjustments on it. By the way, the gain and level controls automatically adjust microphone and speaker levels. The mic has received 5 stars on Amazon which means that it is really worthy of further contemplation and consideration.
Check price at Amazon 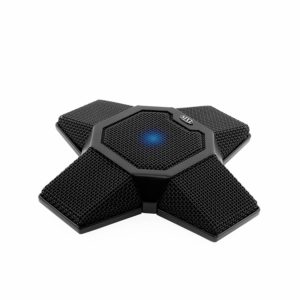 MXL AC-360-Z is similar to the model above. It also connects through a USB cable and has a 360 degrees pick-up. The dramatic difference is that this one can cover distance up to 25 ft so it is suitable for much larger venues, huddle rooms, conference rooms, and so on.

The microphone has 12 capsules in it, so, in its essence, this device represents an array that can be quite flexible and adaptable in work. If you want to record a discussion, there will be four resulting tracks from each side of the microphone. If you don’t know how to merge the tracks, then you might face some troubles.

The shipping package includes several USB cables, mounting hardware, and 5 V power supply. In general, this is an excellent microphone. You can just set it somewhere in the middle of your conference room and never worry about bad acoustics anymore.
Check price at Amazon 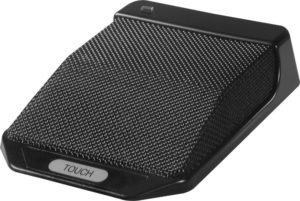 This Crown microphone is similar to the ones above in terms of price but very different in terms of functionality. Before this model, we reviewed the mics that are omnidirectional meaning they can pick up sounds from all the sides. This can be great in many circumstances but sometimes you would benefit more from directionality.

This mic is highly directional. It has a supercardioid polar pattern which means that there won’t be any background noises in your recordings. That said, the distance range of the mic is rather large. Despite being small in size, the microphone is able to capture sounds that come from very far away.

There are LED lights on the mic which indicate the status and somehow contribute to a smarter power system. The sound you get with this mic is crisp and clear. The middle-sized diaphragm allows for a smooth and natural flow. All in all, if the price of this directional mic doesn’t scare you off, be free to check the option out. If it does, there are plenty of cheaper options down below, so read on!
Check price at Amazon 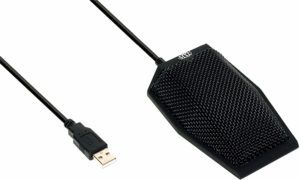 MXL AC404 is a lot cheaper than the first three microphones. This one also works through a USB-cable. In spite of its looks, the microphone is not directional. It has a 180 degrees pick-up meaning that everyone in a room will be in the recording (or in the speakers). The reaching radius of this device is 25 ft! Well, indeed, everyone will be heard.

The microphone is said to work great even in noisy environments. Sure, it uses some noise cancellation techniques but you will still be able to hear some noises in the recordings – it is inevitable given the lack of directionality and broad pick-up.

The construction of the microphone is all metal. On the side of it, there are two inputs – USB and headphone jack. That’s right! You can use your headphones to monitor what you’re saying in real time. This feature is also useful in case you would want to use the mic for Skype conferences – no need to reach for a computer’s headphone jack once you have one on your table, right in front of you.

Lots of people are satisfied with their purchase. Hopefully, so will you! If you are looking for a cheap and efficient solution, this is one of them! This model is the most popular among the boundary microphones.
Check price at Amazon 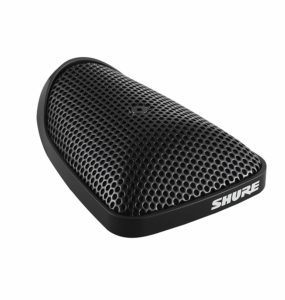 Shure CVB-B/O is an XLR boundary microphone. It connects through a special XLR cable to a preamp or a mixer which, in its turn, can be connected to a computer. XLR microphones are a bit more adjustable than USB ones, however, it is not a must to buy a mic of a particular kind. Both are quite alright.

This microphone comes in two versions – one with a cardioid polar pattern and the other one with an omnidirectional polar pattern. You can choose one that best suits your goals. There is the Commshielf technology in this mic that guards against radio interference that may be caused by smartphones, tablets, WiFi, and so on. This is a great thing since these days everyone has a phone in their pockets. It is good to know this won’t be a hindrance.

The microphone is shipped together with a 12 ft XLR cable. This is a rather long cable so you will be able to hide the wire if you want to. All in all, this is an excellent quality microphone suitable both for home use and various conferences and meetings. If you are looking for the best ‘price-quality’ ratio, this is one of the best.
Check price at Amazon 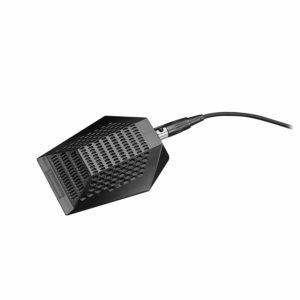 This is one more XLR boundary microphone on our list. The only problem with XLR microphones is that you need to somehow get phantom power for them. Most of the time people buy preamps or mixers that have it in them. There are units for phantom power that are sold separately. Apart from this, there are no drawbacks. XLR is perfect for conveying sound signals and often presented as the most effective way to do it.

The mic has a cardioid polar pattern. It will capture all the voices in a room despite being cardioid. With boundary microphones, it is all very ambiguous. Given the fact that the diaphragm is turned upside down and directed to the ceiling, 180 pick-up means capturing all the sounds that are above a particular level. And, of course, no one would try to speak while lying on the floor. Well, you can try and see what happens.

The rugged construction means durability so you’ll probably be able to use this mic for a long time. All in all, this is another great boundary microphone that can serve lots of purposes. It comes with 25 ft XLR cable which is even longer than in the case before. If cardioid is what you’re looking for, then don’t omit this option – it is worth the money.
Check price at Amazon 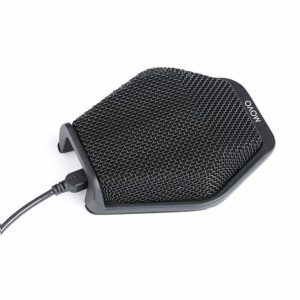 Movo MC1000 is a USB microphone. In lots of ways, this model resembles MXL AC404. It also has a cardioid pick-up pattern with 180 degrees pick-up. The interface of this mic includes two inputs – one for a USB cable and the other one for headphones. Real-time monitoring can be useful in cases you want to record some discussion or talk via Skype.

In general, this is a nice option with a budget price. If you are looking for something simple to use at home or even in an office, then this might be a good option for you.
Check price at Amazon 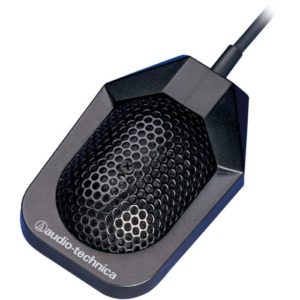 This is one more AT boundary microphone on our list. It is smaller in size than the previous model, which was, of course, the intention of the developers. Despite being this small, the microphone is able to produce fairly loud sounds. It has a cardioid pick-up pattern which means that the mic is able to reject background noises that may come from the environment.

The rugged construction of the mic ensures its lengthy lifespan and durability. There is a 25 ft XLRM cable included which basically means that the kind of connection this mic uses is XLRM. In general, this is a great microphone. Some people would only use it in small halls while others say that it is alright to set this mic in a house of worship or some other large venue.

All in all, if the visibility matters to you and you don’t want an enormous piece of equipment on your table, then this option will most definitely suit your taste. Look out for it and see if it suits you!
Check price at Amazon 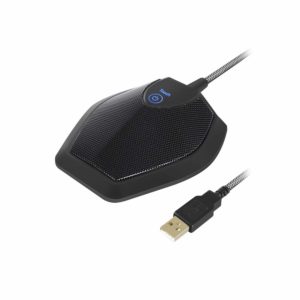 If you want a cheap boundary microphone for video-conferences or other online applications, then this TONOR model should be your choice. Of course, there are lots of other economic options on the market these days, but this is one of the best.

The microphone has an omnidirectional pick-up pattern meaning every sound from every side will be on the recording (or on the other side of the call). The sound you get with this mic is loud and very clear. Many people praise it for that. It is worth noticing that this USB mic like many USB mics is just a microphone, not a speaker. It won’t reproduce sound – for that, you’ll need the speakers.

The looks of the microphone are quite amazing. All black and metal with a blue mute button in the middle of it. The cable that comes with the microphone also looks good. It is 2 meters long, by the way, so there won’t be any problems with connecting. The microphone’s back is an anti-slip surface so you can be sure that you won’t accidentally move the mic or drop it. Upon the whole, this is a great model, especially for those who are in search for something simple, cheap and efficient.
Check price at Amazon

As we can see, boundary microphones can be quite different – big and small, cardioid and omnidirectional. Most of the boundary microphones are designed to capture everything that is going on in a room. There are options, however, that aim for highlighting the speakers above everything else. You can be very inventive in how you’re going to be using your new boundary microphone. Some people buy such mics for better communication with their hearing-impaired relatives. Have you already made a choice? Good. If not, you can look through the frequently asked questions down below.

Q: Why are they called boundary microphones?

A boundary microphone represents a small condenser capsule (or several of them as we’ve learned before) that is placed near a boundary or a surface. So, you kind of need a table or a wall to use these mics and that’s why they are called boundary. Pretty simple!

Q: What pick-up pattern should I choose?

Q: What other microphones can I use for conferences and meetings?

There are several types of microphones that are used for conferences and meetings – gooseneck, ceiling-mounted mics, and even lavalier. You can check this article out to find out more information.