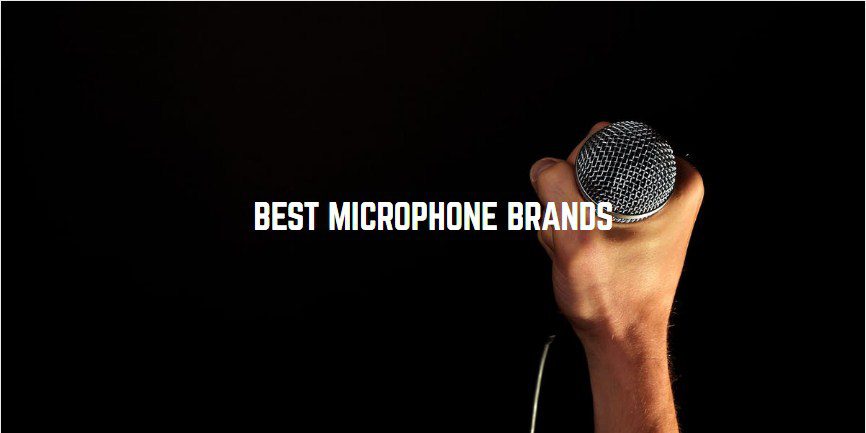 According to Wikipedia, there are at least 44 microphones’ producers in the world today. It is crazy trying to choose one single microphone in such a great variety of options. That’s why, in our era of consumption, many people rely on brands – the companies that have already proven to be good at what they’re doing. So, what are the most popular microphone brands? Let’s find out!

Shure is an American company that has been around since 1925. It has a very long and interesting history. The company focuses not only on the microphones but also on headphones, mixers, and many other audio units. Shure SM58 is one of the most popular microphones in the world. For 35 year, it was a gold standard of the whole industry. The extraordinary quality and durability of this mic made it unmatchable to other models.

Shure is also well known for its wireless microphones systems. The company tries to introduce the best wireless gear since nowadays it is among the most requested products on the market.

Shure microphones are used in the White House. Elvis Presley recorded his hits using a Shure. Many singers nowadays including Jennifer Lopez, Maren Morris, Bring Me The Horizon strick to this brand. It is a big deal! When you buy a Shure product, you can be sure of its first-class quality.

Sennheiser is a German audio company that was founded right after the Second World War. Soon after its foundation, the company started to make microphones and eventually managed to get really good at it. The brand became popular all around the world. The most famous microphone model that brought lots of fame to the brand is MKH 816 shotgun microphone. In 1987 the company was awarded for this mic. Later on, shotgun mics produced by Sennheiser started to be used in Hollywood film production. The most famous model is the MKH 416 short shotgun.

Sennheiser focuses on reaching high fidelity. Its products convey and reproduce sound with excellent accuracy. Besides the microphones, the company also produces aviation, multimedia and gaming headsets, micro-Hifi systems, speakers, amplifiers, and some other audio pieces of equipment. In Sennheiser shops, you can find the best audio gear both for professional and personal purposes.

Audio-Technica is a Japanese company founded in 1962. First, it manufactured only phonograph cartridges. With time though, it embraced other fields including microphones production. Today the company produces microphones, headphones, wireless systems, mixers, etc. suitable both for professional and casual use.

Audio-Technica not only blindly manufactures microphones. It also develops new technologies and installs them in its products. For example, in 2005 the company’s engineers thought of a radio frequency interference resistant technology (RFI-resistant technology). The technology helps to block interference that comes from cell phones, computers, and other devices. Later such technology was embedded in over 50 A-T models. It made the company’s products much cooler than the ones produced by other companies.

Audio-Technica mics were used in hosting numerous Olympic games, World Cup Soccer broadcasts, Grammy and Rock N’ Roll Hall of Fame ceremonies, and many other significant events. The company is definitely one of the industry’s leaders. It has a considerable number of notable well-sold products. If you like a product made by Audio-Technica, you can take it without any doubts!

Blue Microphones is a relatively new American company that concentrates on audio equipment including microphones, headphones, signal processors, music accessories, and others. Its name stands for Baltic Latvian Universal Electronics – one of the founders is from Latvia.

With the help of Apple, Blue microphones introduced a budget mic called Snowball that has quickly caught up. The model has become famous first and foremost among young musicians who would rather record at home than hire a studio.

Blue produces all types of microphones with different diaphragms – condenser, dynamic, ribbon. The company is most famous for its USB microphones that can be connected directly to a computer, a phone, or any other device. There is no need for additional cables – just a simple USB. Of course, it affects the quality of the sound, however, it makes the microphone more economical and easy to use. Long story short, Blue is amazing at producing low-cost audio equipment!

Originally, AKG was an Austrian company created for producing equipment for film production. The company was founded in 1947. Nowadays AKG exists only as a brand. Its headquarters is located in the US and its manufacturing process takes place in Asia – in Harman’s Chinese production facilities. Harman International Industries is a group of Samsung companies so this is one more example of how big giants swallow small businesses.

AKG was the first producer of dynamic cardioid mics. The first dynamic cardioid model has been improved and become a huge success. In general, AKG mics were quite popular in the previous century. Nowadays there are still microphones produced under AKG name. And not just microphones – headphones, audio systems, other devices. However, today the three letters don’t really mean anything.

One of the most famous models is the RØDE VideoMic introduced in 2008. The mic has gained lots of popularity due to the fact that DSLR cameras started to be used for the production of high-quality videos. Rode mics are what Australia is proud of!

Electro-Voice is one of the first American manufacturers of audio equipment. It was founded in 1930 – not the best time for starting a business due to the great depression. Later the company developed noise-canceling mics that were used during World War II. Then, E-V started to produce other equipment, such as phonograph pickup cartridges, loudspeakers, and so on. In the 1960-s, the company was awarded for its advancements in the microphone production.

Now the company remains one of the top audio gear producers, however, in 1998 it merged with Telex Communications. Apart from microphones, Electro-Voice is known for the production of amplifiers and loudspeakers.

Q: What is the best microphones brand?

There is no best microphones brand. Each brand has certain advantages and drawbacks. Therefore, blindly relying on brands should never be an option. To be a discerning customer, you should read the reviews written by those who have already bought a certain product. Besides, it is necessary to understand the process of production – where the desired microphone is manufactured, who makes it, how much the labor costs, etc.

Q: What is brand?

Brand is a certain name of a product or business. Today, some brands function as autonomous businesses while others represent no more than just a name. This is due to merging, which is quite a common process in the capitalistic world.

Q: Should I even look at the brands while choosing a microphone?

Most of the time it is better to look at the peculiarities of specific models and see if they suit you. However, sometimes brands do matter. For example, Rode microphones are produced in Australia, which already tells a lot about their quality. AKG mics these days are, on the contrary, produced in China. The process of production is fully automized since the headquarters of the owner is located in the USA. Stay attentive to such details and you’ll always make the right choices.

The one thing you really should look for is a type of microphone.

That is it for microphones brands reviews. There are lots of other brands that are worth contemplation. We’ve chosen the ones that are either at the peak of their popularity at the moment or made a considerable contribution to the microphones’ industry in the past. We hope you found this article useful. Stay tuned and be savvy in choosing audio equipment!