Each of us has used a microphone at least once in their lives and we all know what is it. But have we actually thought about what exactly it consists of? Have you ever thought how exactly the sound is getting transmitted to the speakers, what makes a good quality microphone, what distinguishes a bad one from a good one?

The thing we know for sure is there is a certain particle that allows us to record the sound using the microphone. Depending on its quality, the quality of your record will vary. Moreover, the quality of microphone spare parts have been evolving throughout the decades and today we can get the best microphones with digital signals and perfect sound recording.

The modern definition of a microphone is a transducer that can convert sound into an electronic signal, and this makes sense because microphones for recording and microphones for amplification are pretty much interchangeable.

However, the first microphone was known not using any digital appliances whatsoever, but they are still applicable even today.

Ok now, enough talking about the history – let’s go down to the business. The modern typical microphone usually consists of 7 parts: windscreen, diaphragm, coil, capsule, magnetic core, body and output. Obviously, those parts can also include their sub-components, but this is a separate topic.

You may also like: How to choose the microphone that perfectly suits you

Let’s start with the first part – the windscreen. You can be sure you know this one well – it’s that part of the mic you are speaking to. It’s an interweaved metallic barrier that protects other inner parts of a mic from the possible external damage. 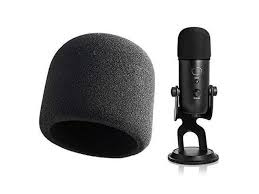 Directly beneath this barries lies the windscreen. Almost all microphones have that part. However, for the studio microphones or for outdoor performance microphones this is often a problem. The movement of air can provoke the plausive sounds that will be caught on the output because of the windscreen.

In order to avoid this problem, it is recommended to use additional pop-filter. The windscreen is a thin layer of foam designed to block out wind from entering the diaphragm and creating unnecessary noise in the signal. And unlike other parts of the microphone, you can purchase windscreen for your mic separately. Good and inexpensive windscreens are produced by eBoot company. You can check them out on Amazon here.

The second part of the microphone that we are going to observe is the diaphragm. Basically, it is a mic’s membrane, that plays a similar role that human eardrums do. When the sound enters the microphone it goes through the diaphragm and it vibrates. Later this vibration is getting turned into the electric signal.

When we are talking about the sound quality of a microphone, the diaphragm is probably the defining factor here. The quality of the diaphragm in the microphone determines at which frequency it is capable to catch the sound waves, and, consequently, which kind of a sound you get at the end.

Moving on, we got the coil. It is a thing that is attached to a diaphragm and it can be found only in dynamic microphones. It has a similar principle of working as the diagram, so when the sound goes through the diaphragm, the coil vibrates as well.

As the coil vibrates, it will move back and forth between a magnet. The movement between the magnetically charged coil and the magnet creates the electric energy in the signal and it is getting transmitted to the speakers.

And thus we are moving to another essential part of a mic – the magnetic core. Just like the coil, it is a specific part only for the dynamic microphones. You have probably already guessed what is it needed for – for the creation of a magnetic field for the coil that allows the vibrations of it create the electric signal.

And now we are going to probably, the most important part of the mic – the capsule. This is the place where all the magic happens, or, being more precise, the sound here is transformed to the electric signal and is ready to go to the speakers in that shape as we know it. 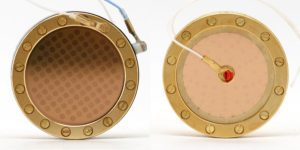 In the case with a dynamic microphone, the core and the coil are separated from the capsule. In other kinds of microphones, such as diaphragm or ribbon microphones, they come together with the capsule and this is another reason why they have different kinds of sound and used in different performance situations.

Another interesting point here is that some microphones require a separate source of power for the capsule, while others don’t. Usually, a microphone can obtain power from a mixer through a setting called “phantom power.” That’s why, when you are buying a mic, it is essential to know whether this kind of mic requires the phantom power to operate or not.

Another part of the microphone is called quite simple compared to the other ones – the body. Logically, it is the largest part of a mic. Curiously, despite this fact, the body almost doesn’t have any influence on the quality of work of a microphone. However, it plays the determining role in how long the mic will last. 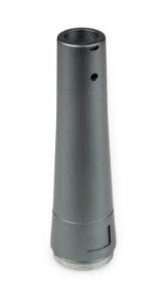 The body of a mic can be compared to the chassis of a car. You can always notice that high-end microphones have sturdy and heavy bodies because it doesn’t only give it the luxury feel, but also protects all the inside parts from possible damages.

We all know that people always drop or bump microphones, especially in the karaoke bars, so the body plays a crucial role in this case. Just imagine how many damages the body is going to handle during the whole expected life of a mic!

And the last, but not least part of a microphone is called the output. Any microphone has this part. Basically, this is where you would plug a cable into the mic. Usually, the standard cable for a mic is XLR type (you have probably seen it before, it is a thick cable with a massive connector).

This three-pronged cable sends a stereo signal and comes in a variety of different lengths. Some microphones have outputs for 1/4” cables while some cheaper microphones come with the cable attached – everything depends on an item you are planning to get. You can see an example of XLR cable by TISINO here. Or check other great mic cables. 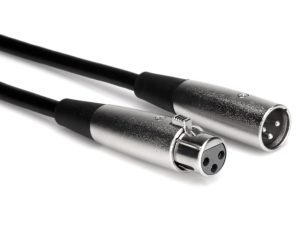 An interesting fact that all the parts mentioned above can be purchased separately for the microphone. However, the chance is that you can construct your own high-quality microphone is quite low. The reason for that is that the parts produced by different manufacturers often have different quality and tech aspects and can be even not compatible with each other.

Another thing is when you are buying a whole microphone, where all the parts are made by a single (or a couple) of manufactures which make then working together in harmony and because their technical characteristics have the same sound nature, they are capable of producing the best audio possible.

You may also like: 14 Best microphones for your smartphone