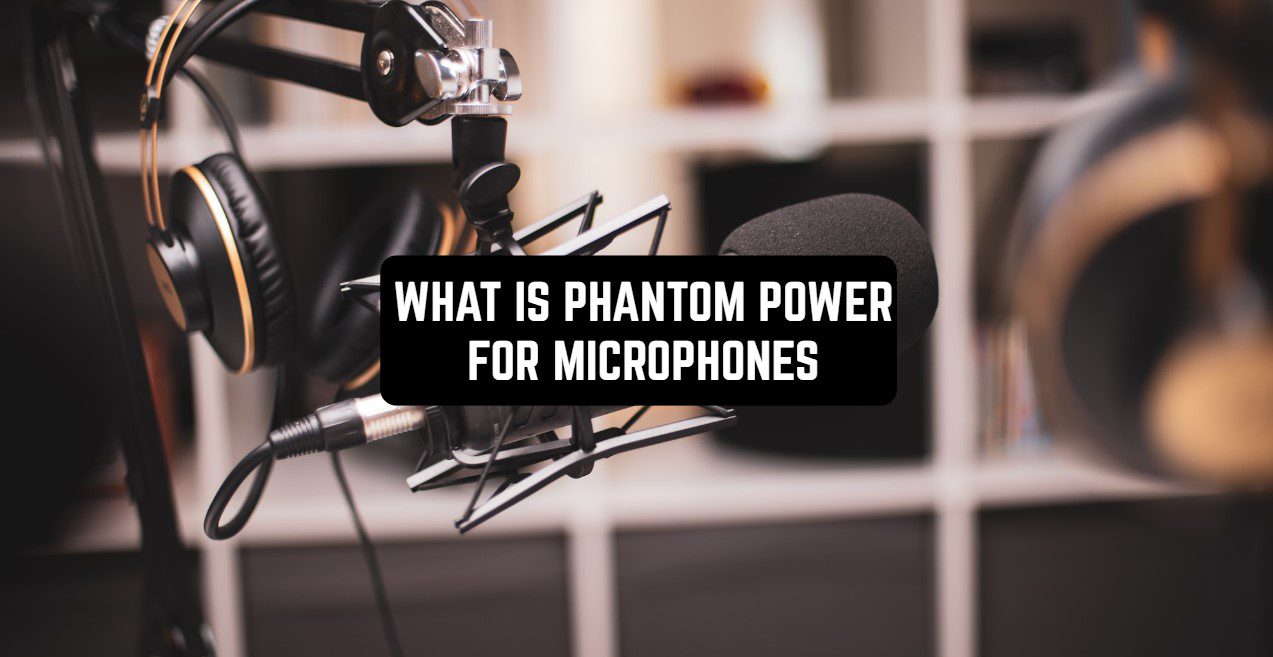 Have you ever heard of the phantom power for the microphone? It sounds kinda funny, right, “phantom power”… In case you are new to the recording world. However, we will try to explain this to you in the following article.

You may also like: 10 Best condenser microphones for every budget

So what is phantom power for microphones?

The official determination claims this is the “term given to delivering DC (Direct Current) to microphones requiring electric power to drive active circuitry”.

There are condenser microphones, for example, Shure’s KSM range that all have active circuitry and therefore require phantom power for their work.

Therefore, phantom power is needed to get microphones working without that huge equipment that people used before.

Moreover, the original condenser microphones (as opposed to electret) require a voltage for polarizing the microphone’s transducer element. Phantom power provides that voltage for both of the purposes mentioned.

How does it work?

To start with, there is a battery inside the microphone that provides the power. As an example, we can take a standard AA battery. AIn other cases, the DC power is provided by the pre-amp/mixer and delivered to the condenser microphone via the mic cable.

And this method is called “phantom power”. The world standard for it is 11 to 52 volts of DC (when you use studio mics they run on 48v). Probably your preamp will have a typical button labeled 48v, and it allows you to turn this on/off.

There are also some older microphones and cheaper audio interfaces that don’t include the phantom power feature. In this case, you can add the phantom power using the space between the condenser mic and the preamp.

In order to fully understand what it is, you need to understand how a condenser microphone works first. There are sound waves that vibrate a diaphragm (usually gold-sputtered mylar) that is stretched in front of a metal plate (called the backplate).

So as the diagram starts vibrating, the distance between the diaphragm and the backplate alters, which changes the capacitance.

Sp those tiny electrical variations which must be amplified before they leave the mic so there’s an internal preamp inside the mic. That’s the phantom power that provides the voltage to charge the diaphragm. It also powers the preamp which is placed inside the mic.

Can the phantom power be harmful to a dynamic mic?

It should be noted that the majority of dynamic microphones don’t require phantom power. They just don’t have active electrons inside. But despite all of that, adding the phantom power to the microphones cannot bring them any damage.

The reason for that is that nowadays microphones are designed in a way that they can interact with the phantom power. At the same time, we wouldn’t recommend hurrying things up and better read the manual before that or contacting the manufacturer – just in case.

We would also recommend turning the phantom power off when you plug or unplug the mic in order to prevent any loud explosive noises that can harm your speakers and your ears.

Why phantom power has such a name?

The microphones that were manufactured in the 20s-40s years the last century were requiring special power to operate. This power supply would frequently be placed somewhere close to the mic and was usually bulky, heavy, and cumbersome.

In the 60s new types of power supplies started to occur allowing them to replace those traditional “power sources”.

Around that time Schoeps and Neumann (German microphone manufacturers) were leaders in this niche.

They led to the occurrence of a new mic standard. The DC power to operate the condenser mic was provided by the mixing board and delivered via the mic cable. Therefore, the need for an external power supply was eliminated.

You may also like: 9 Best Microphones for iOS Under $100

F.A.Q. about the phantom power

Do my guitar requires phantom power?

No, guitars don’t require phantom power. But some guitars have DI boxes and those do require it. However, before any action, you should consult with the manufacturer of the box.

I turned on the phantom power but my mic still doesn’t work! Why?

There can be several reasons for that. Firstly, check the cable and make sure it can do that job. In case you have an old or budget console they might run on a different power supply than 48 Volts – try to find this information in the manuals

And sometimes the condenser mics can operate on voltages as low as 9 volts, be careful with it operating at lower than 48 volts may cause sonic degradation and worse performance in general. You will need an external power supply if that’s the case.

What if I use the phantom power for my ribbon microphone? Can I make it damaged?

This is an arguable question and we would hesitate to give you a definite answer. In general, that’s not always the case. The ribbon microphone that is active will require phantom power. But keep in mind that you should never plug such microphones into a preamp with phantom power engaged.

There are 2 ways to damage the inactive ribbon mic – in case you are using the not proper wiring of the XLR cable and live patching (also known as hot-patching) on a TRS patch bay.

No, it doesn’t There are only low-output dynamic mics, such as Shure SM7B (which is widely used among the streamers) and those mics will require the preamplifier to boost the signal. In case this preamplifier is active, you can turn the phantom power on.